Ok, I so _tried to keep separate posts for each series I watched. But there are _so many, it’s impossible to keep up! (including also my limited time to write). I’ll just present them in reduced form here, along with a few comments.

I watched this mostly because the story (the original screenplay of this obscure game) was written by Scrapped Princess’s _Ichiro Sakaki. As the title implies it’s somewhat music-related, and focuses on the adventures of two characters (out of a bigger cast), Corticarte (nicknamed Cortie) and Poron, also the two main characters of the game. Cortie is a spirit that made a pact with Poron, although she’s rather independent, and her behavior reminds me of Pacifica in _Scrapped Princess. They work in a sort of office (Tsuge Divine Music Player) and apparently, as far as I could gather, deal with uncommon events. 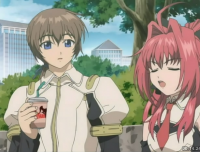 The animation quality is rather low but rather constant so far (I’ve seen episodes 1 and 2). As for the story, there’s no real plot development yet, aside introducing all the characters. Episode 4 promises some insight, at last (the whole thing starts in medias res). Despite being not exceptional, I’ll keep on watching it.

I like this one. A sequel of the original mecha series, now 30 years old, it attracted my interest when I first heard of it. Set 50 years after the original Kotetsu Jeeg, this anime has a different storyline than its predecessor. Hiroshi Shiba was almost defeated against Queen Himika, so he sealed her and her minions off, then he disappeared. It’s now up to Kenji Kusanagi, though why has not yet been told, to pilot the new Jeeg and face again the menace of the Haniwa Genji.

Animation-wise it’s decent, although some parts in CG are truly displeasing. As for the rest, it’s pretty much in line with the rest of Go Nagai’s works: brain dead plots, but nice action. I’ll be definitely keeping on watching this.

I pre-ordered the DVD as soon as I heard it was coming out, as I liked the game quite a bit. This six-episode series (the first two are currently out) is set after the defeat of Nobunaga and show the NY Kagekidan deal with another menace, probably coming from ancient Egypt. Ratchtet Altair is missing, as in the first minutes she leaves for Germany to start a Kagekidan there. Shinjiro is in charge of her duties now, but he doesn’t seem to realize that it also means he’ll have to dress up as Petite-Mint again to take Ratchet’s role as Cleopatra in a musical at the Little Lip Theater.

(sadly I haven’t got any screenshots at the moment)

The animation somewhat left me perplexed. It’s decent enough, but I expected a little more for OAVs, and the CG is truly terrible. I think that somewhat the production had limited funds, as the BGMs are all from the game. Story-wise I can’t say much yet, though I didn’t like the idea of Petit-Mint (I hated that part in Subaru’s chapter in the game), but seems we’ll have to stick with it till the end. As for the rest, there’s no character development as the characters have already been developed in the game, that’s why I think that watching it would not be recommended to people who haven’t played it.

I’ll keep on watching the other volumes, of course.