Since Beta 3 was announced a short time ago, I thought I would try testing KDE4 on my computer. Here I’m reporting on my first impressions and I’ll try to provide constructive feedback as much as possible: the developers are being already (and unjustly, in my opinion) bashed enough.

Let’s start by telling more about the test configuration: I used “hardin”, my laptop, which is equipped with a Pentium4 1.7M CPU, an ATI X600 GPU (using the fglrx driver) and 1.0 Gb RAM. Since I heard bad reports about the Kubuntu packages of KDE4, I decided to compile from source.

It was a rather easy task, thanks to the helpful instructions on the KDE Techbase. I initially built qt-copy (I had to use a snapshot as the SVN checkout didn’t compile), and kdesupport, followed by kdepimlibs, kdelibs and kdebase. I then pulled kickoff from playground and played with additional modules:

I know that the games and kde-edu are in much better shape than the rest of KDE, but since I don’t use anything from there, I didn’t compile them. I made of course a separate user account and used Xephyr to view the KDE session in the desktop.

First of all, I started KDE and I got greeted by a (apparently non-modifiable for now) wallpaper and the Plasma taskbar, the applet viewer and a digital clock. The default settings used the Plastique theme, but I switched window decoration and theme to Oxygen, since I wanted to see how it was. Here’s the desktop with Dolphin open: 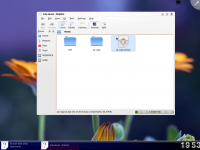 There is a nice hover on effect when you move the mouse over the icons. Next, I tried running kate and konsole. I can say I’m really impressed by the way konsole has changed, the configuration options look much more sane than before! I also tried kate out, but as an assert in the code failed, it crashed when I tried to type anything. Nevertheless, here it is:

Even though it’s not the default file manager, Konqueror is still alive and kicking. Here it shows dennogumi.org: 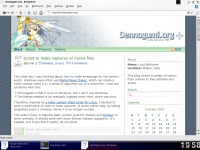 Kickoff, the new K-menu, is not present by default but I have pulled it from playground to see how it was. Despite what the critics say, it looks decent to me. Perhaps it’s because I never use menus (alt-f2 is my religion), but I find it as intuitive as the original K-menu. In any case, personal preferences are more a matter of taste than objectivity. 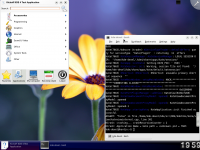 Last but not least, I tried using krunner, the new alt-f2 replacement. It looks really neat, and can do a variety of things by plugging into the relevant KDE subsystems. 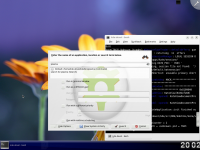 I didn’t get to test Solid, or Phonon as I worked in a nested X session. The battery applet seemed to work, so it may be an indication of Solid doing its work. I don’t think the system is stable enough to run in a full session, but I will do periodical recompiles to see if anything changes.

Since I got kdegraphics to compile, I tried Okular out. It looks almost feature complete, with no visible glitches. Here’s a screenshot if it running and showing my own Lost Innocence: 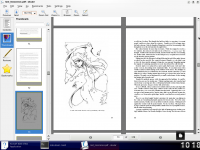 A word or two on the Oxygen theme. I’m liking where it is headed, though perhaps a little more subtlety with the window decoration (to figure out when a window has focus) would be appreciated. I’m sure the Oxygen team is already aware of the issue, however. They’ve done an excellent job, despite their lack of manpower.

Performance wise I didn’t see how it was slower than KDE 3.5. I think the performance was quite nice considering everything was built with full debug.

Finally, I can’t understand all the trolling about “alpha 3”. Most of the applications are OK, so are the libraries. The “problem” is that Plasma is in a state of flux, but that’s to be expected, those guys are re-creating a desktop, a task that requires time. I find it unjust to write comments like the ones I saw on the Dot. What good will they bring? Nothing. Like I said, I’ll keep an eye on Plasma and see how it evolves. Therefore, I’m not even trying to judge Plasma until KDE 4.0 is out, or unless my non-coding mind comes up with something useful.

I’ll be trying KDE 4 more in the next days / weeks, and report if I get the time.

« Script to make captures of movie files
Archive
My experience with KDE4, part 2 »