Hello people! Yes, it’s been a while but I haven’t forgotten about it… with the Brainstorm’s new look and most technical issues resolved, I’m able to make Brainstorm Digests more often (hopefully!)

Since we have skipped a few months, what I’d like to present today (aside the usual data about the past month), is a general overview of the state of Brainstorm since the start of the initiative a while ago. Now we finally have data to draw some conclusions. But I’ll get to that at the end of the digest.

As of the past month, 96 valid ideas have been posted, on an average of 3.2 ideas per day. Not a lot, but we need to consider that at least in Europe August is generally a period where people go on holiday. Two ideas have been forwarded to bugs.kde.org, and two have been marked as implemented. 10 ideas were already existing in KDE, while the duplicate and invalid ideas posted this month were both 7. Last but not least, two ideas were rejected.

This month’s top voted idea is “[Plasma][KWin]Applications minimize to plasmoids” by forum user dflemstr. The idea proposes to have plasmoids associated to a specific application, that could be shown in the application’s tooltip when in the taskbar. Also, by dragging the item from the taskbar to the desktop, the application’s associated plasmoid will be shown. dlfemstr provided a mockup to illustrate his idea:

Is it too hard to implement? Is it useful? The community clearly showed interest, but let’s wait for the response of the Plasma team (after they’ve recovered from Tokamak 3).

For the most discussed idea of this month, we have drIDK’s “a simple way to install .bin and .run file!”., which is also this month’s most controversial idea. drIDK proposes to have .bin files for installers (like Google Earth) be opened in a terminal and have their executable bit set automatically. He suggests the use of a “runner” of some sort, and provides a mockup:

There have been a lot of posts to this idea, many raising concerns about the security and thinking about how this approach could be improved. There is no clear idea yet.

What about this month’s top poster? You may not believe it, but it’s not TheBlackCat (who is on holiday at the moment)! Instead, the top poster award goes to Madman, who is being very active in the various discussions. Congratulations, and keep being productive.

Status of the project

No monthly stats this time. Instead, I’ll show you the progress of the ideas since the start of the project and until today: 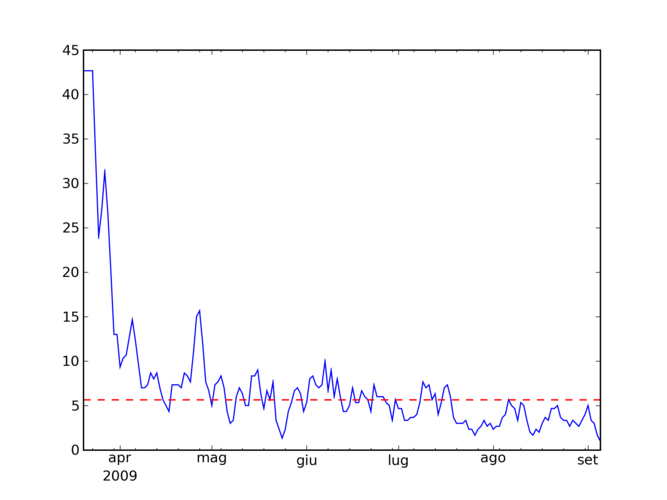 This was calculated with a sliding window average of 4 days. The dotted line indicates the median number of ideas submitted per day. As you can see, the number is around 5 ideas per day, save the first big burst. I think it’s OK for now, because the number of ideas posted does not tell anything about the discussion going on in the already submitted ones, nor if ideas have been implemented, and so on.

Speaking of ideas, our physicist-to-be on the team, Hans, has plotted a distribution of the frequency of the number of ideas per day: 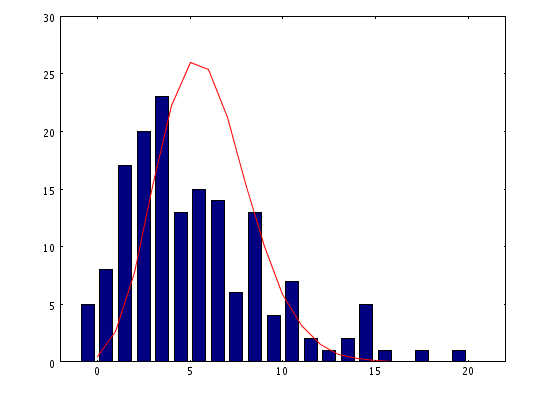 That’s all for now - I hope to be more regular in the future, now that we have a reliable stats. By the way, if KDE users (but developers too!) want more statistics, let us know!

Words from the team

The forum team would like to remind everyone that the old way to tag ideas in
Brainstorm (by adding keywords within brackets [ ]) is now obsolete. Brainstorm now uses the same tag system as the rest of the forums, and all members can easily tag ideas with the new tag editor. See this announcement for more information.

Did you like this digest? You didn’t? Let us know so we can improve it!