During the discussions for the release of openSUSE 12.3, the topic of update notifications and applets was brought up again. Originally openSUSE shipped with a custom update applet, but since it was basically unmaintained, the decision was made to switch to Apper for openSUSE 12.2

The original Apper used in that version had a number of issues, which the upstream developer (Daniel Nicoletti) fixed in a newer version, which also had a lot of other improvments. However we originally couldn’t switch because it depended on a newer, API-incompatible version of PackageKit, meaning that the PK bindings for libzypp (the heart of openSUSE’s package management) needed to be adjusted and ported.

So, for a while it was not clear on how to proceed, until at the recent hackathon, Stephan “coolo” Kulow ported the PK zypp backend to the newer PackageKit version. Once that issue was solved, the KDE team was able to update Apper to the latest version (0.8) and push it to the distribution. So openSUSE 12.3 (KDE) will make use of Apper as main method of notification for updates.

I would like to stress that Apper is not meant as a full blown replacement of YaST or zypper, but mainly as a way to handle distro and maintenance updates, integrated with the KDE Workspaces.

The Apper program is actually divided into two pieces: the main application itself and a plasmoid. We’ve been testing the plasmoid the past weeks and consensus is that it’s not yet ready to be pushed to users, so only the main application will get installed by default.
When you have new updates, an icon will pop in the system tray informing you:

Clicking on it will bring up the main interface, where you can review and select the updates: 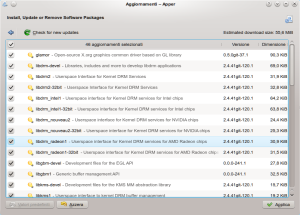 Afterwards, the update process will start.

Of course, such an addition means that more testing is required, to ensure that outstanding bugs get fixed before the openSUSE 12.3 release. Therefore, if you are willing to test - jump aboard!