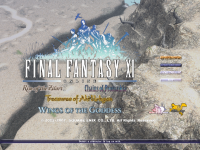 Finally my copy of Wings of the Goddess has arrived. It was just a matter of putting the DVD in the drive and let install the measly 350+ Mb of update (rather low for a DVD). As usual, Square Enix’s installation program is greedy with regards to information. Once it was installed, I enabled the expansion in PlayOnline and was good to go (save a 20,000+ file check).

Let me start by saying that I didn’t see much of the expansion. I did it purposefully, as I postponed exploring to Wednesday, when I’ll gather my group and go around (one member has not the expansion yet: he will get it on Monday if all goes well).

For now I started by “unlocking” (i.e., enabling the passage from the future to the past) some Cavernous Maws (namely the ones in Rolanberry Fields, Batallia Downs and Sauromugue Champaign) and wandered around in the areas around Jeuno (that’s where you start - Jeuno itself is not accessible, though). 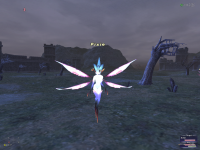 With each new expansion, new monsters appear. In this case you see a Pixie on the left. Pixies are neutral enemies that generally do not attack you and in some occasions they can even heal you (Cure IV) or give you a raise (Raise III) if you’re knocked out. From what I have read pixies have a “hate” system like fomors or apkallus, meaning the more you kill them, the more they get hostile towards you. Luckily you can lower your “hate” by doing a certain action in the past. As far as I’m concerned, I won’t be touching them (what kind of Paladin would I be?). 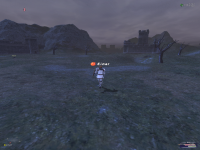 Of course there aren’t just enemies, but also scenery. In this picture I’m running through the Batallia Downs of the Crystal War time. As you can see, even though the forest has been already cut down (to build fortifications against the Shadow Lord’s armies) the ramparts and everything seems to be in top shape (well, of course: they’re still battling). 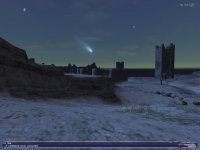 Another “strange” phenomenon is the comet in the sky, highlighted already by the trailer. I don’t know if it’s related to the Shadow Lord himself (I doubt it: when he resurrected there was no such thing) or to the entities which brought me (and countless other players) in past Vana’diel. I guess it will be explained through time.

Last but not least, two images from a rampart in Sauromugue Champaign and the interior of Garlaige Citadel, a well-built fortification back then and not the ruined, undead-infested place of modern day Vana’diel: 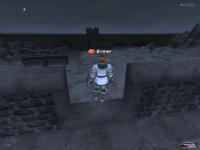 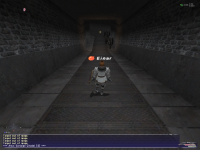