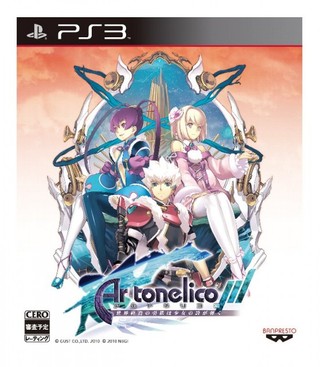 It’s been a while since I blogged about anything non-FOSS. This time I’ll be sharing some impressions on one of the games I’m playing at the moment, that is,** Ar Tonelico III** (which arrived at my doorstep two days ago). I admit I haven’t been a fan of Gust games (aside from Ar Tonelico, they’re known mostly for the Atelier series), mostly because technically wise they didn’t really perform that well. While I understood they’re a small company, sometimes it was a little too much.

I bought this one because from the movies and information disseminated throughout the net it looked like it was better, so I started reading information, which in turn prompted the buy: it’s also a good way to keep my Japanese in order, as I need to keep up with the language if I want to understand things.

Right now I’ve just played a couple of hours, and it looks decent, although with some technical issues (the characters glide over the terrain, rather than walk). I’ve also seen the infamous Purge System in action (look it up online), which made quite a number of fan sneer for a various number of reasons. As of the story, I can’t say anything at the moment: I’ve just started. At least it is moderately fun.

Here’s a hands-on (Italian) which covers more details. I’ll try to post a few updates in the future (if I don’t forget….)

And here’s a quick video I made with my camera: